The Casinò of Venice on the Grand Canal 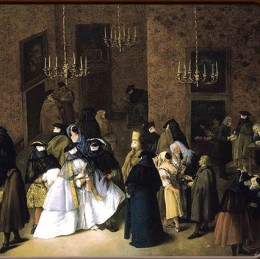 The Casinò di Venezia, founded in 1638, was originally located in the ancient Ridotto di San Moisè and it's the oldest gaming house of the world. It remained in its original place until the 1930s when the Municipality of Venice decided to move the Casino to the Lido of Venice. In 1946 then the Municipality of Venice bought Ca' Vendramin Calergi on the Grand Canal, the current worldwide known home of the Casino of Venice.

In 1999 a new branch of the Casino was opened at Ca' Noghera in Venice mainland, near the International Airport Marco Polo, it's still today the first American-style Casino opened in Italy.

Few know this, the great composer and conductor Richard Wagner died in Ca' Vendramin Calergi in 1883. Inside the palace that hosts the Casinò there's a small museum dedicated to Wagner.

Request information about this event
<< Back